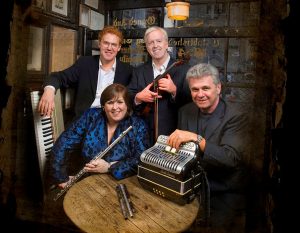 THE PRIDE OF NEW YORK CONCERT
SATURDAY MAY 20TH @ 8PM
Admission $20 ~ Children only $5
Four giants of traditional Irish music, Brendan Dolan, Brian Conway, Joanie Madden & Bill McComiskey have pooled their talents to create the East Coast’s premier not-for-profit live Irish Traditional Music band. They take their name from the rich wellspring where they grew up at the forefront of the extraordinary renaissance of traditional music in the 1970s & ‘80s. Don’t miss their debut performance at the GAC.
For Reservations or more information call 203-257-8737 or email tmquinn@optonline.net or www.shamrockirishmusic.org