The Following is sourced from Wikipedia. For additional information, please visit the GAC Library.

The Easter Rising (Irish: Éirí Amach na Cásca),[1] also known as the Easter Rebellion, was an armed insurrection in Ireland during Easter Week, 1916. The Rising was mounted by Irish republicans to end British rule in Ireland, secede from the United Kingdom of Great Britain and Ireland and establish an independent Irish Republic while the United Kingdom was heavily engaged in World War I. It was the most significant uprising in Ireland since the rebellion of 1798.[2]

Organised by seven members of the Military Council of the Irish Republican Brotherhood,[3] the Rising began on Easter Monday, 24 April 1916, and lasted for six days. Members of the Irish Volunteers — led by schoolmaster and Irish language activist Patrick Pearse, joined by the smaller Irish Citizen Army of James Connolly, along with 200 members of Cumann na mBan — seized key locations in Dublin and proclaimed the Irish Republic independent of the United Kingdom. There were actions in other parts of Ireland: however, except for the attack on the Royal Irish Constabulary barracks at Ashbourne, County Meath, they were minor.

With vastly superior numbers and artillery, the British army quickly suppressed the Rising, and Pearse agreed to an unconditional surrender on Saturday 29 April. Most of the leaders were executed following courts-martial, but the Rising succeeded in bringing physical force republicanism back to the forefront of Irish politics. Support for republicanism continued to rise in Ireland in the context of the ongoing war in Europe and the Middle East and revolutions in other countries, and especially as a result of the Conscription Crisis of 1918 and the failure of the British-sponsored Irish Convention.

In December 1918, republicans (by then represented by the Sinn Féin party) won 73 Irish seats out of 105 in the1918 General Election to the British Parliament, on a policy of abstentionism and Irish independence. On 21 January 1919 they convened the First Dáil and declared the independence of the Irish Republic, and later that same day the Irish War of Independence began with the Soloheadbeg ambush. 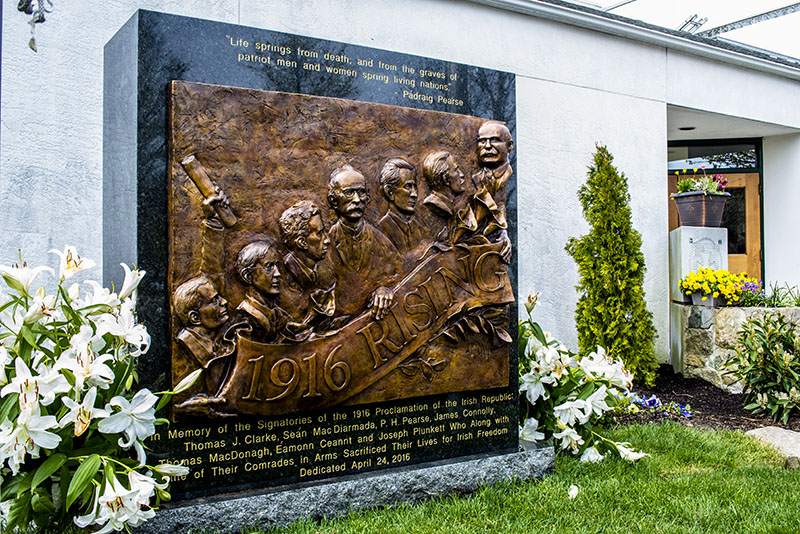 To commemorate the 100th year of the Easter Rising (100 years of freedom!), this monument has been placed on the GAC grounds with the hope of teaching our children and grandchildren the sacrifice made by seven brave heroes and many more who gave their lives so Ireland could gain their independence from England.

Born on March 11, 1857 on the southern coast of England to Irish parents and was raised in County Tyrone. He found himself engaged in republican organizations at an early age and spent nearly 40 years devoted to Ireland’s independence. Clarke favored armed revolution and his rebellious actions resulted in exiles to America as well as spending 16 years in English prisons. He was a respected member of Clann na nGael during his years in the U.S. and an influential leader of the Irish Republican Brotherhood serving as treasurer. In 1915, he initiated the IRB Military Council where he and six others planned an insurrection. Clarke is the first signature on the Proclamation of the Irish Republic and was stationed at the GPO during the Easter Rising. He was the second to be executed at Kilmainham Gaol and died on May 3, 1916 at the age of 59.

Born in Ballymoe, County Galway on September 21, 1881. The son of an IRB, his family moved to Louth and eventually to Dublin. Ceannt was a devout, gentle and intelligent man and embraced Irish culture, history and arts.  He was a champion uilleann piper and founder of the Pipers Club in 1900.  A member of the Gaelic League, Ceannt’s nationalism expanded as he joined Sinn Féin in 1907 and was sworn into the IRB in 1912 and Irish Volunteers in 1913.  When the IRB Military Council was formed in 1915 to plan the Rising, Ceannt was appointed Director of Communications. As Commandant of the 4th Battalion stationed at South Dublin Union, Ceannt saw intense fighting and surrendered only upon Pádraig Pearse’s command.  Prior to his execution on May 8, 1916 at Kilmainham Gaol, Ceannt wrote: “And in the years to come Ireland will honour those who risked all for her honour at Easter 1916.”

Born on February 28, 1883 in Kiltyclogher, County Leitrim. As a teen, he emigrated to Glasgow and Belfast for work. Upon return to Ireland, he became a member of several activist groups including an original member of the Irish Volunteers. Mac Diarmada believed that revolution, bloodshed and even martyrdom were imminent on Ireland’s road to freedom and was very vocal in his beliefs. His unwavering commitment to Sinn Féin and the Irish Republican Brotherhood led to his role as secretary of the Supreme Council of the IRB and member of the Provisional Government where he signed the Proclamation of the Irish Republic. Mac Diarmada was stationed at the GPO during the Easter Rising but did little fighting due to his polio disability. He was one of the last signatories to be executed at Kilmainham Gaol and died on May 12, 1916 at the age of 33.

Born on February 1, 1878 in Cloughjordan, County Tipperary to two educators who celebrated the arts and Irish culture. A member of the Gaelic League, MacDonagh was a published poet and playwright and served as assistant headmaster at St. Enda’s, a bilingual secondary school founded by Pádraig Pearse. MacDonagh was discouraged by the circumstances of Ireland and believed “zealous martyrs” would be responsible for her freedom. Forming the Irish Volunteers in 1913 and joining the IRB in 1916, MacDonagh was a late addition to the Rising, possibly chosen due to his close relationships with other members of the Provisional Government. He was commandant of the 2nd Battalion at Jacob’s Biscuit Factory and held down the fort until he received Pearse’s unconditional surrender document. At the age of 38, MacDonagh was one of three signatories killed by firing squad on May 3, 1916 – the first day of executions at Kilmainham Gaol.

Born into an affluent Dublin family on November 21, 1887. He was devoted to Irish culture, helping establish The Irish Theatre in Hardwick Street and serving as contributor turned editor of The Irish Review. Plunkett had a keen mind for military strategy and was largely responsible for the plan followed by the IRB Military Council. His negotiations with Germany secured weapons for the insurrection but that shipment of arms was ultimately intercepted by the British on its way to Ireland. Battling tuberculosis for years, Plunkett underwent glandular surgery just days before the Rising. Nonetheless, he was present at the GPO Headquarters with a young Michael Collins serving as his right-hand man.   On the night before his death, Plunkett was allowed to marry his fiancée Grace Gifford. The youngest signatory of the Proclamation, he was executed on May 4, 1916 at the age of 28 in Kilmainham Gaol.

Born in an Irish ghetto of Edinburgh, Scotland on June 5, 1868.  He left school at the age of 10 and became a laborer like his father and grandfather before him. Connolly spent time in Scotland, Ireland and the U.S. as an active Irish nationalist and socialist.  In 1912, he formed the Irish Labour Party with union leader Jim Larkin and served him during the Dublin Lockout of 1913.  Connolly was also a founding member of the Irish Socialist Republican Party and the Irish Citizen Army.  Believing that ‘Without the shedding of Blood there is no redemption”, Connolly joined the Irish Republican Brotherhood in early 1916 and began planning the insurrection with his fellow signatories.  He served as Commandant General during the Rising and directed military operations from his station at the GPO.  Severely wounded, Connolly was carried to Kilmainham Gaol on a stretcher where he was strapped to a chair and shot. He was executed on May 12, 1916 at the age of 47.

Proclamation of the Irish Republic 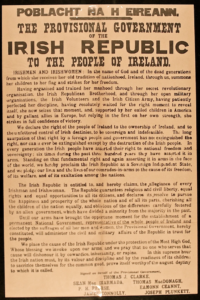